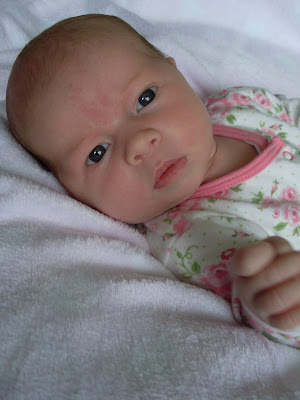 I've finally uploaded some pictures onto my netbook, so I will put a slideshow of Rosie's pictures together when I get five minutes... watch this space!
Posted by Pete, Ali, Charlie and Rosie at 19:34 3 comments: 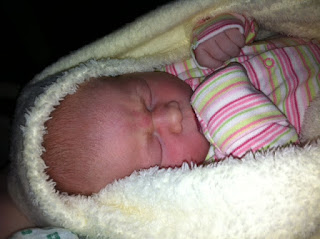 Rosie Hannah Turner,
Born 10/10/11 at 4.07pm,
Weighing 9lbs11oz.
She is beautiful, pink and healthy.
We are overjoyed and Charlie is ecstatic!
It has been a long day, so I will update properly later.
Welcome to the world, little darling!
Posted by Pete, Ali, Charlie and Rosie at 21:53 3 comments: 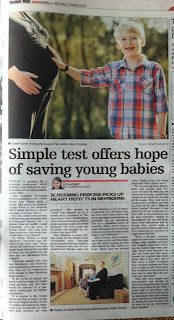 The article about newborn pulse oximetry testing that we featured in hit the news-stands today!
Hopefully it will help raise awareness of something so simple that can really save lives.
I'm not sure if you'll be able to read the text, but you get the idea!
I'm tickled pink with the picture of Charlie - wonky teeth and all!
(Although I have to admit that the sub-editing of my quotes made my hair stand on end - when I was a chief sub-editor, I'd have lynched my subs if they had sent a story to press with so many typos!! But hopefully all the readers won't notice quite as much as I did!)
Posted by Pete, Ali, Charlie and Rosie at 09:56 1 comment:

Well, LO is due today.
And as of now, I don't think she's got any plans to arrive on time.
We're just having a leisurely day today - making the most of what might (or might not!) end up being our last weekend before LO makes her big appearance.
I'll keep you posted!

Sent from my iPhone

Posted by Pete, Ali, Charlie and Rosie at 11:52 No comments: 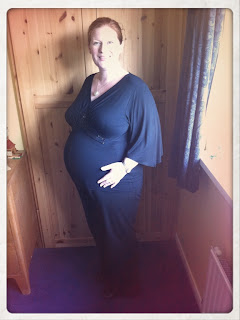 I had every intention of documenting this pregnancy with regular 'belly pictures'... but that's as far as I got!
So here's one of me just now at 39w3d.
And no, I don't normally look quite so smart, but we just had our photos taken for the newspaper, so I thought I'd capitalise on the fact that I've actually brushed my hair and put on a pair of heels by getting Pete to take a pic for me. It's a bit over-exposed, but you get the idea!

Anyway - you might be wondering why are we having pictures taken for the paper.
Primarily because we're helping my consultant, Bryan Beattie, publicise a new screening campaign to check blood oxygen levels in newborns.
We were very fortunate that Charlie's HLHS was picked up on ultrasound scan, because only about 50 percent of congenital heart defects are found via antenatal scanning.
And of the 50 percent that are undiagnosed before birth, many babies with major, life-threatening cardiac problems initially seem well and are discharged from hospital - only to become very ill, very quickly.
For many families, by the time they get their babies back to hospital, it can be too late.
But even though these babies initially seem well, the oxygen levels in their blood are often much lower than normal - a key warning to doctors that further investigation is needed.
A simple and non-invasive test can pick up the low oxygen levels before they even leave the hospital.
They just need to be attached to a pulse oximetry or sats machine, which will tell doctors the vital percentage of oxygen in their blood.
That's it.
Easy and painless - and already part of routine post-natal screening in the US, but not here.
So, Mr Beattie has started offering the screening at his private clinic - but we - and he - really want the NHS to pick up the baton here and make sure every newborn is screened before leaving hospital.
It really is a lifesaver.
Even though LO has been repeatedly scanned, and has had in-depth cardiac scans, we will definitely be having her sats checked before we set foot out of the hospital.

So... back to the newspaper.
I wrote a press release for Mr Beattie last week, (for those of you who don't know, I was a journalist before I had the kids, so it was quite nice to pick up my reporter's notebook again!) and was interviewed by a reporter the other day. A photographer came this afternoon to take some pics.
So, hopefully I should have some really nice pics to show you before too long. I'll post the link to the piece in the paper as well if I can find it when it comes out.

No other news really - all was well when I went to the midwife last week. LO was still head down and growing nicely.
It's hard to believe she is due in four days (although I am still adamant that she's going to be late!)
We go back to the hospital at the end of next week for another checkup, by which time I'll be about five days overdue.
I want to avoid being induced if I possibly can, and Mr Beattie is happy for me to go about 12days late, so we'll just have to wait and see what happens!
Watch this space!! 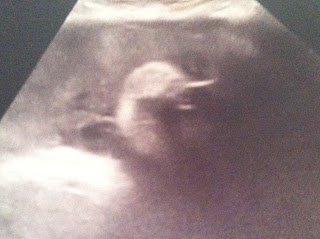 Hi folks.
Well, our appointment today went really well!
As well as checking growth, they also re-checked all the key points - heart, kidneys, bladder etc.
Her anatomy is still looking totally normal and everything seems to be working perfectly.
She is still growing like mad - all her measurements were about two weeks ahead and they estimate she is weighing about 7lbs4oz now.
The best bit of all is that she has turned herself around again, so she is no longer breech!
So now all we need to do is wait for her to make an appearance!
Mr Beattie has made our next appointment for 40wk5d, so who knows - maybe LO will be here before then!
I have to go to the community midwife in about a fortnight just for her to check me over, but other than that, we just have to play the waiting game.
Mr Beattie was very happy with how LO is doing, which is great. He also told us that all of LO's cardiac scans have been reviewed by Orhan Uzun, the cardiologist, and he is very happy with everything too! Just what we want to hear.
Consequently, he doesn't think she will need a cardiac echo after she is born, but he does want to check her oxygen sats after she arrives - as much for my reassurance as anything else!
He gave me his mobile number and asked me to text him as soon as LO is born, so he can come and see her and put a sats probe on her.
I know I've said it before, but it is so fantastic to have a medical team around us who we really trust and can rely on.
I'm attaching the latest pic of LO - it's not very clear, but you can still see how chubby her cheeks are!
So, now we need to finish off all the preparations for LO's arrival, and I need to start hitting the raspberry leaf tea! I don't know how much good it does, but it can't hurt to give it a whirl!
Posted by Pete, Ali, Charlie and Rosie at 16:50 No comments: 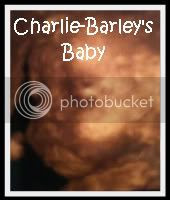 Grab LO's button for your blog!